Tia Ballard
Aoi Sakurada (櫻田 葵, Sakurada Aoi?) one of the main characters of the Joukamachi no Dandelion series. She is the eldest child and first daughter of the royal Sakurada family. As the oldest one, Aoi is very respected and well-looked up to, being the most popular sibling in the upcoming election for the nine Sakurada siblings to become the new successor of their father. For her own reasons however, she does not want to become queen.

Aoi is a young woman of an average build and height that has been described to be very beautiful by people around her. She strongly resembles her aunt, Hazuki Shinonome, color wise. Aoi has long, straight, royal blue hair with some strands of hair hanging between her eyes with her fringe parted most to the right, and her hair falls freely down to her lower back. She has blue eyes and a fair and light complexion.

Aoi is usually seen with her school uniform, which consists of a white long sleeved shirt and a black blazer with gold buttons and trimmings on its edges and pockets. Her tie and skirt are blue to indicate that she is a third-year student. She also wears black knee-length stockings with brown slip-on shoes. Otherwise, she is seen with casual clothes when she is at home, and dresses and sometimes her crown at ceremonies and parties.

As the oldest one, Aoi is a very mature and calm girl who cares for all of her siblings, watching over them from the background according to Kanade Sakurada. She is very responsible, thoughtful and has a kind character, often helping out at home and also helping Satsuki Sakurada (Aoi's mother) with cooking and other things. As one of the oldest one, Aoi makes sure she never hurts the feelings for those younger than her; purposely losing at a game so Shiori Sakurada (Aoi's younger sister) could have a higher chance to win. Aoi always talks politely and she is a very good student in school, getting good grades. She is afraid of losing or hurting her friends; so she is never mean to anyone, and is very honest and is greatly admired of many due her beauty and personality. She is very soft-spoken, never raising her voice, sometimes even coming out as meek, but she is still very straightforward and hardworking. Sometimes, however, she can be a bit of confronting and scolding, but only in a comedic sense. But she can also be very level-headed, calm, serious and handle stressful situations well. For example, when some robbers came to rob a shop Aoi happened to be in, she calmly but coldly told them all to drop their weapons without acting scared, and they obeyed (due to Aoi's power).

Aoi has a very strong sense of right and wrong, as she doesn't want to become king due to her ability because she doesn't want people to obey every order she gives them, which would become a problem as a king has to give a lot of orders. The first time she discovered her power, Aoi was very unsure and kept quiet about it until much later where later revealed it to the citizens right for the election was over. She believes that this was the best for both her and the citizens, despite having the advantages in the election. Her father claims that because it's her, Aoi's power to make anyone obey her orders resides in her, since she has such a kind heart and wouldn't want people to obey her. Aoi has always thought that having the bonds with her family and friends is the most important, as she mentions that she'd happy as long as she could protect the bonds she had with her loved ones. She loves her family deeply, as she wants to, rather than something expensive, status or honor, for things to forever stay the way they are now in her household as well as everything around her, despite thinking it as "greedy". Aoi mentions that as the oldest child, she needs to fulfill her duty and that's her responsibility for all the things she has done, including things that involve her power. Due to these qualities about her, Aoi is very popular, both among the citizens and people in her school.

In the manga, another "side" of Aoi was shown after real ability was revealed to the citizens by her father right before the election. Aoi confessed that she had lived her life fooling herself, because she thought it was her fate as royalty; but in reality, she actually hated it all. Even though she always was refined and polite, she also thought about bad things and acted lazy like everyone else, but she held it all in. She realized that she just wanted to have fun without having to worry about other people fall in love, get married and eventually have children. In the end, she begged for the citizens to not vote for her— she was desperate and was crying. And that was Aoi's first request ever and Akane Sakurada described it as being irrational, straightforward and childish. But since she had tried so hard for the past twenty years, all the citizens were able to accept it.

Aoi is a 17-year old young adult at the beginning of the series, being in her third and final year in Royal Sakuraka High School. Her father explained that once Aoi graduated from high school, they would hold an election for the next leader.

Though being the most popular sibling in the royal campaign, with her gathering popularity from all ages, she is the only of the Sakurada children that don't want to become queen. This is explained why after discovering her real ability, Absolute Order. If she gives someone a command, they must obey, no matter what the command is. She keeps this as a secret from everyone except her father, as she is afraid of this power and has very little control over it. It is also because of this that she feels she does not deserve to be queen, despite having the highest chance according to the pre-election rankings.

Aoi graduated from high school in winter without any worries. She explained that she would enroll at her affiliated college in spring, and therefore had to take make the best of the time she had left.

On the elections day and right before the next king's crowning, Aoi explained her true ability for all the people listening (citizens) and she then tells everyone that she's going to withdraw from the election, with the permission from Souichirou Sakurada (Aoi's father). Though being nervous about how everyone would react, people instead cheered for her either way due to her honesty. In the manga, however, instead of dropping out the election, she begged the citizens to not vote her, despite seeing it as selfish.

After Shuu Sakurada (Aoi's younger brother) was elected as the new king, it is seen that Aoi is leaving home to study at university. However, she did spend some time at home before she moving out. She also stated that once she moves out, she'd have "a lot of fun". She told Misaki Sakurada and Haruka Sakurada that she wanted them (and the rest of the family) to visit her sometimes.

Aoi is the first born child to the king, Souichirou Sakurada and the queen, Satsuki Sakurada. It was stated that Aoi had her other ability "Absolute Order" since she was young, but she didn't have control over it and it wasn't as powerful as it became when she grew up.

One day when she was in elementary school, Aoi was alone and nervously asked three girls, Nanao, Shizuru and Uzuki to be her friend. They warmly accepted it, making Aoi very joyful.

Aoi's power is originally said to be Invisible Work (インビジブルワーク, Inbijiburu Wāku?) "Perfect Learning". It means that once she learns something, she will never forget it; making it easy for her to take tests at school, getting perfect grades. She remembers all places she has seen and all people she has met. She has also memorized all the country's laws. However, this power is revealed to not be true by Kanade, as it is the same as "being smart".

Thus, Invisible Work is only a front for her true power, Absolute Order (アブソリュートオーダー, Abusoryūto Ōdā?) which allows her to order anyone under her bidding. Aoi first realized when she asked one of her friends do show something she was talking about, and she obeyed her with no hesitation at all, even having a very emotionless tone in her voice and very blank eyes. This happened once again when she asked for friends for help. Aoi grew more worried, and one day she wanted to test this out. She asked one of her guards to do a handstand while bark like a dog, and he did, greatly shocking Aoi. Her real ability was later revealed and explained to her and her father by some doctors.

However, on the election day, it is finally revealed that Aoi's true power is not the publicly announced Invisible Work or even Absolute Order, but Brave Believer (ブレーブ・ベリーバー, Burēbu Berībā?). As Aoi has always believed that people have obeyed her orders because they have to, it is false as her true power Brave Believer made people carry out her orders happily, by their own accord. Brave Believer is a power that gives people the push to lay their feelings bare. As people have things they want to do from the bottom of their hearts but they hesitate, Aoi's power gives them the courage to take that step. This power, however, is not revealed or introduced in the anime.

Akane is Aoi's younger sister. Aoi greatly cares for her and she is also protective of her, like when Kanade commented on Akane for her shyness. However, Aoi also worries about Akane due to her extremely shy personality, but she is very tolerant of her and usually walks her to school. Aoi is also one of the people behind Akane's alter-ego, Scarlet Bloom, encouraging her and also giving her confidence. Aoi's explanation was the reason Akane wanted to become queen. Akane also respects Aoi and sees her as the best person to become king.

Kanade is Aoi's younger sister by two years. When they were children, Aoi stated that Kanade was really nice towards her and made her flower crowns and armbands and enjoyed playing with her. Now, however, Kanade sees Aoi as her rival for the election since Aoi is the one has the most votes and the highest chance of becoming queen. Because of this Kanade often tells Aoi that she can withdraw from the election if she doesn't have any real desire to become queen; "saddening" Aoi. However, as sisters, they are still on good terms, as Aoi truly sees her as a very kind and caring girl. In return, Kanade respects Aoi as an older sister and states that she is always looking after her siblings from the background.

Aoi met Nanao, Uzuki, and Shizuru when she was children when Aoi asked them if they wanted to be her friend, and they gladly accepted. However, Aoi thought that they only wanted to become friends with her because she's royalty, but she then realized that they're true friends. They often hang out with each other and go to various places like cafes. They are very close and are best friends now, and the girls care for Aoi a lot, and vice-versa. They also once celebrated Aoi's birthday, surprising her with a party. The three girls said that they will be with Aoi forever, unless she says she doesn't want to, showing how much they care for her. 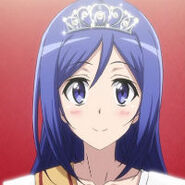 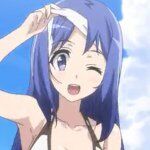 Retrieved from "https://joukamachi-no-dandelion.fandom.com/wiki/Aoi_Sakurada?oldid=7057"
Community content is available under CC-BY-SA unless otherwise noted.