Ayase (綾瀬, Ayase?) is a supporting character in the Joukamachi no Dandelion series. She is a student at Royal Sakuraka High School, a classmate of Haruka Sakurada and the chairman of her class.

Ayase is a teenage girl of average build and height with straight shoulder-length black hair that is mostly parts to the right, a hair-clip on the left side of her fringe and light-colored eyes. She is usually seen with a normal Sakuraka High school uniform for girls.

Ayase is a very calm person who is often seen with a level-headed demeanor and sometimes even expressionless face, but nonetheless is kind. She is also caring as she mentioned that she can easily accept people for who they are, no matter where they are from. As the chairman, she is very responsible and mature, as she knows all the school rules. She is supportive of her friends and will help them when they are in a pinch, and she is also polite and respectful as she addresses her seniors with respect and care.

As the chairman, she is also responsible and wants to help others. Despite her calm demeanor, she can blush occasionally around Haruka Sakurada, whom she has a crush on, and can get quite upset and unsure when other girls get close with Haruka. She takes every opportunity to get closer to Haruka and wants to tell him about her personal matters, which he declines. Despite this, she is shown to genuinely care for others.

Ayase is a 15-16-year-old girl who is a second-year student at Royal Sakuraka High School. She is the chairman of her class, therefore has responsibility for the class and she also has a crush on Haruka.

Haruka is a classmate of Ayase. She has a crush on him, though her feelings aren't reciprocated. However, Ayase will help him when he needs it; becomes upset when he doesn't call her by her name. Ayase takes every opportunity possible to get closer to Haruka and only wants to be acknowledged by him, shown as she asked him to "scold" her, much to his shock. At one point, she even considered wearing a swimsuit of her own after noticing Haruka peeking at Ange while she was wearing a swimsuit. She is seen observing him closely and can act jealous when he pays attention to other girls, and she, therefore, tries to interrupt in some kind of way, but not in a very rude way. Though she is often seen with an emotionless face, she can be bashful and embarrassed in his presence, and she genuinely cares for Haruka and his well being.

Ayase seems to view Ange as a friend, though she becomes suspicious of her and Haruka's relationship sometimes. Ayase seems to view Ange as her "rival", as she mentioned that she has "long ways to go" after seeing how hard Ange worked and how Haruka checked Ange out. She also once sat in between Haruka and Ange when she saw Haruka checking out Ange. However, despite this, she is still friendly towards her, as she mentioned that she would accept Ange, no matter how she was. 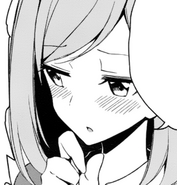 Ayase blushing
Add a photo to this gallery

Retrieved from "https://joukamachi-no-dandelion.fandom.com/wiki/Ayase?oldid=6724"
Community content is available under CC-BY-SA unless otherwise noted.