Cat to the Sakurada Family

Borscht is a male cat with black and white fur and black eyes, and it's pink inside his ears. Borscht also wears a blue necklace with a yellow bell on it around his neck.

Since Borscht is a cat, his personality is not showed much. However, since Shiori talks to Borscht sometimes with her ability, is is seen that he is comfortable with the family and enjoys being with his family; mentioning that he is deeply grateful for picking up a stray like him. However, Borscht usually chews on plastic bags instead of cat food, and claims that even the taste of a royal cooking "loses" to a plastic bag.

Hikari saw Borscht wandering around and decided to follow him when she and Akane were out shopping, so when Akane lost sight of Hikari, she became panicked and started looking for her. Hikari followed Borscht until he climbed up on a tree, much to Hikari's dismay. However, since she thought that Borscht was stuck there on the tree, she decided to help him by making herself grow so she could reach him. However, this made Borscht scared, but Hikari still "saved" Borscht. And after this, Hikari decided to adopt Borscht.

Not so much known about Borscht's background, but he was a stray cat and his former home was a box.

Hikari is Borscht "real" adoptive owner. She was instantly taken by Borscht cuteness and hence, decided to follow him and then adopt him. Hikari also likes Borscht and sees herself as his 'real' owner. However, Borscht seems to be more comfortable with Akane, much to Hikari's dismay.

Akane is the one Borscht likes the most in the family. He usually sleeps in her chest, since it reminds him of his "former home". Borscht also likes to cuddle with Akane and he usually wakes her up in the middle of the night to give him food. Akane also likes Borscht and looks after him, despite Borscht chewing on plastic bags sometimes. 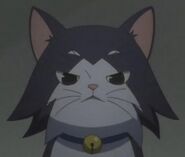 Borscht chewing on the plastic bag

Borscht sleeping on Akane's chest.
Add a photo to this gallery

Retrieved from "https://joukamachi-no-dandelion.fandom.com/wiki/Borscht?oldid=6677"
Community content is available under CC-BY-SA unless otherwise noted.