Bubu (ブブ, Bubu?) is one of Misaki's clones, being the clone of gluttony and part of her power All for One. She is a supporting character in the Joukamachi no Dandelion series.

Bubu has straight pink hair which she ties into two high pigtails, and she has the same clothing as Misaki. Bubu also has hazel-colored eyes.

As the clone of gluttony, Bubu eats a lot and likes every kind of food, and she is almost always seen eating. She helps out with clubs by eating students baking's, and when at home she sometimes carries around a chips bag. When Misaki have discussions with her clones, Bubu sometimes disappears to eat. When she is not eating, she seems to be fairly bored. She talks in a very "lazy" manner, and she is also noted to be very quiet. When she does get determined, it just resolves around food. She also knows when some food she likes is nearby, like when she sensed that Shuu had bought pudding, despite him not being exactly home yet.

When Misaki was born, all of her clones, including Bubu, were born along with her. Since a young age, Misaki could control her power where Bubu along with the other clones were acknowledged for excelling at their own skills.

Bubu is, as a part of Misaki, a teenage girl who is the clone of gluttony. Though she isn't exactly a part of any club, Bubu helps out students by eating their baking's, which they appreciate, since they claim that Bubu's appetite is great. Misaki doesn't mind this either, since she wants to help other people as much as possible and because she handles her clones schedules. When the royal campaign started, Misaki's clones are brought out more often. Though Bubu does participate in Misaki's discussions, she does not say much and often only eats and sometimes disappears to eat. However, when Misaki really needs help, Bubu will try to help her along with the other clones. 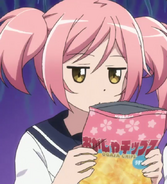 Bubu with her chips bag

Retrieved from "https://joukamachi-no-dandelion.fandom.com/wiki/Bubu?oldid=6023"
Community content is available under CC-BY-SA unless otherwise noted.