Karen is a teenage girl with average build and height. She has short, straight black hair that is about neck-length. She have a small ponytail on the left side tied with a hair tie. Her fringe is mostly parted to the right, while it is cut a bit on the opposite side. She has blue eyes, and a fair and light complexion.

Karen is usually seen with her school uniform, which consists of a light-yellow colored sweater and a white shirt with a red tie (to indicate that she is in first year) underneath. She wears a red skirt, black knee-length stockings and brown slip for shoes. Otherwise, she is seen with casual clothes when going out and at home.

Not so much known about her personality except that she is a kind girl. She is very caring, especially towards Akane. She can also get embarrassed and shy sometimes when people compliment her. She also seems to be quite serious sometimes.

Karen is not just Akane's best friend, but also childhood friend. She's in the same class and grade as her, too.

When Karen was younger, Akane came to her house after making her bodyguards lost because she though that they would scare Karen. Karen explained that her mother was coming home late, but wasn't lonely because Akane was with her. However, after hearing some noises upstairs, which they mistook for Karen's dad, was actually two burglars. Akane then attacked them, by throwing things at them and using her ability. However, after a while one of the guys threatened to kill them with a kitchen knife, and Akane (and Karen) extremely scared, Akane used her ability and made it go overboard, which caused a marge off the house destroyed. After the two burglars were caught, Karen said that at that day, Akane didn't let go of Karen's hand when she was crying.

Akane and Karen are best friends and childhood friends. Karen deeply cares for Akane and often worries about her. She shares fun memories with her and they trust each other very much. Karen is deeply grateful that Akane saved her in the past. She also encourages Akane at times when she is down, or feel discouraged. They are very close and share a special bond.

Although this is never really stated directly, the plot often likes to joke about Karen's rather probable romantic feelings for Akane. For example, she also has nosebleed when Akane unintentionally shows her panties, or in earlier scene, when she is clearly upset when Akane confesses she was only joking when she said, that she wants to marry her.

Not so much shown about Karen and An's relationship due to their lack of screentime, but they were shown being with each other and encouraging Akane in the anime, which proves that they are quite close friends. 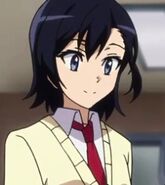 Karen in the manga
Add a photo to this gallery

Retrieved from "https://joukamachi-no-dandelion.fandom.com/wiki/Karen_Ayugase?oldid=7065"
Community content is available under CC-BY-SA unless otherwise noted.