Levi (レビイ, Revi?) is one of Misaki's clones, being the clone of envy and part of her power All for One. She is a supporting character in the Joukamachi no Dandelion series.

Levi has straight pink hair like Misaki, which she ties into a pony-tail at the right side, and she has the same clothing as her original. However, Levi has light blue eyes.

Levi is great at acting and is therefore a member of the school's drama club. She is seen expressing her feelings, and as her title suggest, her common emotion is envy. She can also understand when a person is jealous, like Misaki was once despite not showing it directly. She is very honest with her feelings and will say what she thinks. She is noted be quite blunt but calm and level-headed as well.

When Misaki was born, all of her clones, including Levi, were born along with her. Since a young age, Misaki could control her power where Levi along with the other clones were acknowledged for excelling at their own skills.

Levi is, as a part of Misaki, a teenage girl who is the clone of envy. She is a part of the drama club in Misaki's club where she often acts, including one play, Cinderella, which Misaki accepts, since she handles her clones schedules. When the royal campaign started, Misaki's clones are brought out more often. Levi always participates in Misaki's discussions and voices her opinions. Though she doesn't see any reason to begin campaigning when Misaki's hadn't even started, she will "defend" her when other people like Haruka points this out. She seems to know Misaki very well and sometimes makes her realize some things she didn't before. When she does start campaigning thanks to Haruka, Levi helps Misaki. 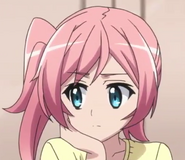 Retrieved from "https://joukamachi-no-dandelion.fandom.com/wiki/Levi?oldid=6025"
Community content is available under CC-BY-SA unless otherwise noted.