Onee-chan (by Mio)
Tamao-chan (by Akane)

Tamao (タマオ, Tamao?) is a young girl who takes care of homeless cats along with her younger sister Mio. She is a minor character in the Joukamachi no Dandelion series.

Tamao is a young girl with light-colored eyes and hair, and her hair reaches down to her lower back. She also has shoulder-length strands framing her face, tucked behind her ears and she wears her hair in bangs.

Tamao was shown being quite harsh towards Akane (disguised as a normal person) and suspicious of her. She felt like she knew her before but didn't realize that she was indeed the princess. She is also very outspoken, energetic and a bit strict, in contrast to her younger sister Mio. However, she has a very soft-side as she takes care of homeless cats that grew to be attached to Tamao (and Mio), though she doesn't want to admit this. She is also shown to be kind and caring as she was laughing around Akane but reverting back to her "uninterested" personality again, showing that she has tsundere tendencies. She is quite dense as well, as she didn't realize it was Akane until she took off her glasses. She was then shown to adore to Akane very much and a more fangirl-ish side was shown of Tamao.

Tamao has lived with her younger sister Mio and her parents. Though she likes pets, they can't have any at home since her father is allergic to them. However, Tamao mentions that since her father works hard everyday for money, the young girls can buy food for the cats which the cats seem to like. Tamao notes that it is more than enough.

When Akane went out to figure out exactly what a king is supposed to do, she stumbled upon a cat family under a bridge. When Akane approached them, the mother cat hissed at her, causing Tamao to later see her and become angry at her under the suspicion that she tried to do something bad to them. Tamao sarcastically explained to Akane under the disguise as "Hana Satou", that a mother cat would obviously try to protect her kittens. Tamao felt like she had seen her before, but brushed it off by saying that she looked like any other girl you'd see. Though Akane adored the sight of Tamao helping the cats, she harshly told Akane to help instead of staring at her. When Mio tried to tell her older sister that the girl was indeed the princess Akane, she was interrupted each time. Tamao then explained to Akane about how her fathers allergic to pets so they can't have them at home. However, due to their father working they can afford feeding the cats, to which Akane comments that their father is indirectly protecting the kittens.

When Akane was about to go, Akane's red jamming glasses fell off, causing Tamao to find out her real identity and become shocked; while Mio tried to prevent her to reveal that they knew her real identity. Tamao was then shown to adore and look up to Akane, and was very happy when she told them that she'll see them again another time. That day, Akane found out what kings are supposed to do, thanks to meeting Tamao and Mio.

Though Tamao was harsh, strict and threw some mean comments towards Akane at first, she eventually warmed up to her as she wanted her to pet the kittens despite them being angry at Akane at first. They then laughed and had a good time with each other. When Akane announced that she had to go and asked if she could visit again, Tamao was seen being a bit disappointed and told her that she could do whatever she liked, and at the same time, blushing. This means that Tamao enjoyed Akane's company but didn't want to admit it. When Tamao found out that "Hana" was indeed Akane, she was shown to adore Akane, a real princess, very much, as she thinks that she must be a "ninja". She was also very nervous and happy as she couldn't believe it, and needed her younger sister to prevent her to not leash out in shock. Tamao then said farewell to Akane with big smile. Earlier hints that she adored Akane was when she was being quite upbeat when she thought that "Hana" supported Akane.

Mio is the younger sister of Tamao. They are seen by each others side a lot as they take of the kittens by themselves. They have different personalities, but get along well. Tamao is the one who orders around Mio when helping the cats, though Mio has to look after her older sister from saying some things that are not supposed to be said, for example, Akane's identity and her rooting for Kanade in front of Akane. Their relationship is noted by Akane to be like hers and her older sister Kanade's relationship when they were younger. 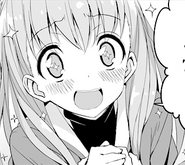 Tamao after finding out who "Hana Satou" really was

Retrieved from "https://joukamachi-no-dandelion.fandom.com/wiki/Tamao?oldid=5881"
Community content is available under CC-BY-SA unless otherwise noted.