Yuniko (ユニコ, Yuniko?) is one of Misaki's clones, being the clone of wrath and part of her power All for One. She is a supporting character in the Joukamachi no Dandelion series.

Yuniko has straight pink hair which has she tied into high twin tails and she has the same clothing as Misaki. However, Yuniko has hot pink-colored eyes which is slightly sharper that Misaki's.

As the clone of wrath, Yuniko is very hot-headed, competitive, determined, and more loud-mouthed compared to the others clones. As her title suggest, Yuniko can become very serious and angry in some situations. However, she puts in her effort at playing baseball and is very talented in it, as the baseball club members in Misaki's school appreciate Yuniko's great work and talent. It is stated that they won by three runs thanks to her, and Yuniko herself is always ready to play baseball whenever she is brought out by Misaki. But Yuniko can also be kind and soft-spoken, especially towards her original Misaki.

When Misaki was born, all of her clones, including Yuniko, were born along with her. Since a young age, Misaki could control her power where Yuniko along with the other clones were acknowledged for excelling at their own skills.

Yuniko is, as a part of Misaki, a teenage girl who is the clone of wrath. She is a part of the baseball club in Misaki's club where the members "borrows" Yuniko at times, which Misaki accepts, since she handles her clones schedules. When the royal campaign started, Misaki's clones are brought out more often. Yuniko participates in Misaki's discussions and sometimes complains why Misaki haven't started campaigning yet. When she does start campaigning thanks to Haruka, however, Yuniko obviously helps Misaki. 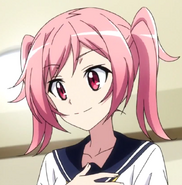 Yuniko ensuring Misaki that they are all a part of her.
Add a photo to this gallery

Retrieved from "https://joukamachi-no-dandelion.fandom.com/wiki/Yuniko?oldid=6028"
Community content is available under CC-BY-SA unless otherwise noted.